Top 5 Slot Upgrades for 2020 – TPE Poker & Casino Blog
admin
January 22, 2021
11:43 am
0
In our segment today, we will present to you five new incredible online slot games brought to you by some of the world’s best gaming providers. Pragmatic Play – Dog House Megaways Man’s best friends are the main characters in this latest animated cartoon-style game from the Pragmatic Play software team. The pack of four...

In our segment today, we will present to you five new incredible online slot games brought to you by some of the world’s best gaming providers.

Man’s best friends are the main characters in this latest animated cartoon-style game from the Pragmatic Play software team. The pack of four good boys and canines is led by the big, hard-baller Doberman, who is the best rewarding symbol out of all. This Megaways online slot makes use of 117.649 new ways to win, features an RTP rate of 96.55% and offers rewards up to 70.000x your bet, based on your performance.

Dog House Wilds can appear on reels 2 – 5 and add multipliers of 2x and 3x value as well. The dog paw is the scatter symbol that initiates the Free Spins bonus games. Make sure you come across at least 3 Scatters to start the Re-spins gaming features where players can choose between two types of rounds.

There are Sticky Wilds Free Spins that feature between two and seven sticky symbols on the reels and Wild multipliers from 1x to 3x. The 2nd best option is the Raining Wilds Free Spins upgrade where up to 6 Wild Symbols with the best multiplier value appear in random locations on the screen. Re-spins can also be purchased with the Buy Free Spins option. 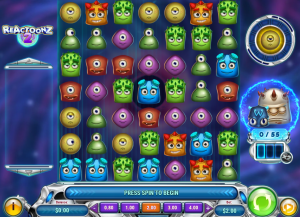 Silly one-eyed monsters and dorky colourful aliens have invaded the system in Reactoonz 2 and stolen a spot on our compiled list. The player is teleported to a parallel universe in this, at first, hard to understand game developed by the popular team of Play’n GO. This video slot machine was released in October 2020 on a big 7×7 grid formation, almost three years since the first game.

It’s played using a cascading technology and gaming style where the aim is to arrange 5 or more identical symbols, either horizontally or vertically. When 5+ matching symbols touch, they will use their energy which will cause them to explode and disappear off the screen. The aliens found above them will swoop down to take their place while new symbols fill up the reels.

This online slot features a Fluctometer and a Quantumeter. Before every spin, a random symbol gets chosen to fluctuate. When winning combinations are formed with this unique symbol, they will boost the performance of the Fluctometer technology, which needs a total of 11 upgrade charges. After wins are counted an Electric Wild shows up in place of the fluctuating symbols. All non-wild icons that pop thanks to the Electric Wilds are used to charge the Quantumeter.

As the Quantumeter fills up, it releases hungry Energoon as well as Gargantool Wilds. They eat up huge chunks of the playing grid awarding the best wins. The maximum return that you want to trigger in this computer slot game is 5083x the initial stake which equals to €508.300.

The next online slots game from our list is also a Play’n GO type of software production. Legacy of Dead takes us into the King’s chamber where the spirits of the Pharaoh reside. The best golden treasures await those who play on mobile and desktop devices and can find their way through this mysterious Egyptian tomb. 10 different paylines may be activated on the 5-reel setup of this highly volatile game.

The golden burial chamber is the main symbol of this online slot machine. It functions both as a wild and like a scatter symbol. You will want this shinny tomb to appear in 3 locations anywhere on the reels to upgrade to the Free Spins bonus features. When triggered, players are awarded 8 Re-spins.

The magical powers of King Tutankhamun are released upon you during the bonus rounds. One random symbol will be chosen and illuminated. If these special symbols land on the reels, they will expand and cover an entire reel to improve your performance. The discovery of three additional scatters results in a 2nd symbol to become upgraded, which doubles the winning potential. All symbols can become special with a bit of luck and help the players in landing the ultimate win of 500.000 coins. 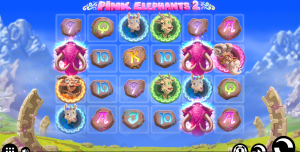 Pink Elephants 2 has also rightly made it onto our 2020 list. It is the long-awaited sequel to Pink Elephants released in 2017. Software designer Thunderkick takes us on a journey to a mysterious type of land high up in the mountains in their latest game. A 6×4 reel configuration awaits the players with 4.096 ways to land wins. This is a high volatility online slot with a maximum payout of 10.000 times your bet. The game’s RTP is 96.13%.

The highlight of this software product is the Bonus Games that need to be triggered by the golden peanut-like scatter symbols. 3 scatters will buy you 7 Free Spins. The best you can get is 19 in case you are lucky to discover 6 golden scatters. A Mystery Scatter Symbol may also appear in random locations during the base game, making the likelihood for bonus games much higher.

When the bonus feature starts, players are sucked into a parallel universe inhabited by the pink elephants. The elephant symbols need to be collected and used to fill particular animal meters. When all meters get filled, the logos will be converted to pink elephants offering an opportunity to trigger massive-level wins.

The Elephants 2 online slot can be played at CoinSaga Bitcoin Casino with available slots deposit bonus of up to 1 BTC.

In Sticky Bandits Wild Return, Quickspin software developers take us back to the Wild West where 3 trigger-happy gunslingers are making trouble in a saloon. Where there are whiskey and cigars, you know that unpleasantries are sure to happen. This number 5 entry is a sequel to the Sticky Bandits saga that begun two years ago.

This time around, all bandits can appear as regular symbols or like massive icons taking up a 2×2 or 3×3 grid. When 3 hat-wearing skull symbols make their presence heard on the reels, a shootout and Lucky Shot Free Spins Bonus feature happens inside the saloon. The bandits fire their guns and convert regular symbols into Wilds. All bandit symbols that appear during the Free Spins get turned into Sticky Wilds.

The Quickspin software creators didn’t stop there in terms of bonus content. A slot symbol might pop up on reel 5 triggering a Quick Slot Bonus. 1 to 3 Free Spins are awarded this time, with payouts of up to x500 your bet. The max win on offer in this slot is 1145 times the wagered amount. This is a high volatility game with an RTP of 96.28% and a total of 40 paylines.